[This project was conducted in collaboration with Angel Hwang and is under review at New Media & Society.]

As common tasks become increasingly automated, artistic creativity continues to be perceived as a uniquely human skill. In the past, however, innovations have spurred new modes of artistic creation. For example, the invention of portable paint tubes led to the conception of plein air painting, ultimately spurring Impressionism. Today, creatives and technologists alike struggle to define the correct level of technical buttressing for creativity: some creatives refuse to consider technology-enhanced workflows, while some technologists usurp artists by exalting the automatic generation of unstaid content for widespread internet distribution.

Most research fields have established evaluation metrics; for example, researchers studying educational tools can compare students’ test results with and without using the tool. However, technologists aiming to develop artistic tools have few metrics with which to appraise either the creative tool itself or the final output produced by the tool’s users. By nature, artistic creativity is challenging to objectify, precluding quantifiable success for researchers. However, technologists must develop the artistic tools that will enable creativity in cutting-edge environments, like augmented reality (AR), from which artists have previously been excluded due to unapproachable back-end development processes. AR, along with many other emerging technologies, eagerly awaits the arrival of well-tooled human creatives who will design “killer apps” that will draw widespread adoption of these new platforms.

The few researchers that have endeavored to design artistic creativity technology have utilized to a bevy of disparate evaluation strategies. One oft-cited study concluded that more diverse alternatives will afford a more creative outcome, leading many researchers to prioritize the generation of disparate design iterations. Some researchers have taken this a step further, arguing that more efficient tools will enable the creation of more outputs, which will in turn foster creativity, ultimately prizing speed over quality. Other researchers hire “creative experts,” a tricky pool to define and recruit, to arbitrarily rate the quality of the creative output. Still other researchers measure the effectiveness of the creative output for conveying a given message, prioritizing ease-of-understanding over novelty or aesthetic considerations. Most tellingly, some researchers have begun to collaborate with cognitive psychologists to implement specific behavioral experiments of creativity.

I have experienced the difficulty of evaluating artistic creativity firsthand; I have struggled to demonstrate a system’s effectiveness due to a lack of accredited metrics. Additionally, in leading research for Photoshop and Illustrator, I found that there were no industry-wide evaluation metrics to consult. We are wholly unable to predict how the tools will shape billions of creative projects, which will ultimately appear in advertisements, websites, art galleries, and social networks across the world.

This research aimed to offer a long-overdue framework for evaluating tools for artistic creativity, thereby eliminating the over-reliance on individual metrics (e.g. time-to-complete) that may not capture the full breadth of factors affecting creativity. By offering rigorously-researched evaluation metrics, this research seeks to improve the quality of creative tool offerings and enhance their respective output. Secondarily, it aims to encourage more researchers to develop novel creativity tools for a range of users’ needs, thereby enhancing networked access to opportunities for users across the world to ideate, create, and share.

To accomplish this, we first introduced a novel user-centric longitudinal methodology for defining the public conception of nebulous concepts (in this case, creativity) in the context of digital environments. On a curated content website, we collected a combination of self-report (interviews and surveys), behavioral (tracked usage data), and visual data (participants selected images). We recruited two groups of participants who have varying levels of experience with creative endeavors (i.e., creative professional vs. non-pro groups). Over the course of four weeks, these participants explored a study website, accomplishing realistic tasks while finding pieces that they deemed particularly creative. Using this methodology, we collected five data streams: 1) qualitative pre/post study interview data, 2) qualitative weekly questionnaire responses, 3) quantitative survey data, 4) quantitative website usage analytics data, and 5) the selected content itself, which can be visually analyzed both computationally and qualitatively. We analyzed the data by applying grounded theory, descriptive statistics, a reinforcement learning framework, and computational visual analyses. Using this methodology,we approach what we believe to be the first audience-defined conception of creativity for the digital context, in which the creative audience is prioritized as the beholder of creativity.

The qualitative results reveal that viewers define creative works as those that are novel, visually appealing, meaningful, and attention-grabbing. The drawing of attention appears to indicate creative success specifically in the digital realm, where an onslaught of visual content necessitates enhanced saliency. Indeed, as has been well-documented, social media’s business model produces an "attention economy," in which platforms vie for users’ attention in order to claim profitable views, clicks, etc. This has caused users to expect evermore salient content; in order to remain competitive, social websites have rewarded and prioritized attention-grabbing content. Such prioritization occurs by way of proprietary algorithms that take user behavior as input and optimize for human attention. This prioritization reinforces users’ expectations for more and more attention-grabbing content in online environments, and this may have caused the overvaluation of eye-catching pieces in my study. If users have a strongly-developed habit of scrolling mindlessly through an endless array of content until a piece catches their eye, they may automatically use that tactic to scope creative content as well. It’s also worth considering the online meta-performance of engaging with creative content via social websites, signaling to one’s network that one is both culturally-informed and artistically-aware in a Bordieuan fashion. Here, the tension between self-curation (a la Goffman) and algorithmic curation (a la Hogan) is brought into relief.

The results also reveal that (only) those participants with professional creative experience are especially concerned with the process by which content is created when they are making creative ranking decisions. The professional viewers’ focus on process may be explained by theories of embodied cognition, in which one’s perception is grounded in mimesis. Indeed, previous neuroscientific studies have demonstrated that dancers will neurally "mimic" the dance when viewing the performance of other artists. In a similar way, the professional participants were "experiencing" the process of creating the creative piece, developing physical empathy for the creator’s process. If that process involved particular expertise, the professional viewer would find more value in the creative work. The creative professional’s physical empathy for the artist may be a more active extension of Gombrich’s oft-discussed "beholder’s share,” in which a viewer’s perception of an artwork is a necessary step of the creation process. Professional participants not only contribute by perceiving the work, but they also embody the creation process through mimesis.

Given their newfound role in prioritizing content, algorithms have become curators that operate according to metrics of attention. Recently, artists have indicated that they experience market pressures to optimize their creative work for saliency on social media. As artist Robert Saint Rich has described, this causes "issues resulting in lack of depth, emotion, personality, and sincerity in the production of visual works [to] arise. If visual art is not captivating enough on a first glance, a ’like’ will not be granted from the audience, and the digital work will die." This opens up broader questions regarding the future of creativity in the context of instant global broadcasting and minuscule attention spans, which I would be keen to explore in my ongoing doctoral research. Indeed, recent months have been heralded as the start of the "creator economy," in which digital spaces are used primarily to monetize creative content. This economy is direct-to-consumer, in which creatives interact directly with their audiences, thereby enabling creative success that is driven by viewers’ decisions. It is apt, therefore, that my research has focused on the viewer-defined conception of creativity. Rather than relying on profit-driven algorithms, the creative landscape has the potential to be curated by its audience. In this way, creative value is democratized, minimizing creative judgments from elite institutions (e.g., museums, galleries, and auction houses) that previously wielded the power to "make or break" an artist. This may enhance the visibility of previously under-represented creators whose work will illuminate a broader range of cultural experiences, expressing their perspective with art that crosses borders via technology.

In sum, this research aims to offer a rich viewer-defined conception of creativity exhibited online, according to participants’ longitudinal qualitative responses, quantitative survey responses and usage patterns, and visual content selections. This research will be used to interrogate technology’s role in the creative process through an immediate application to the study of AI-driven creative spaces. 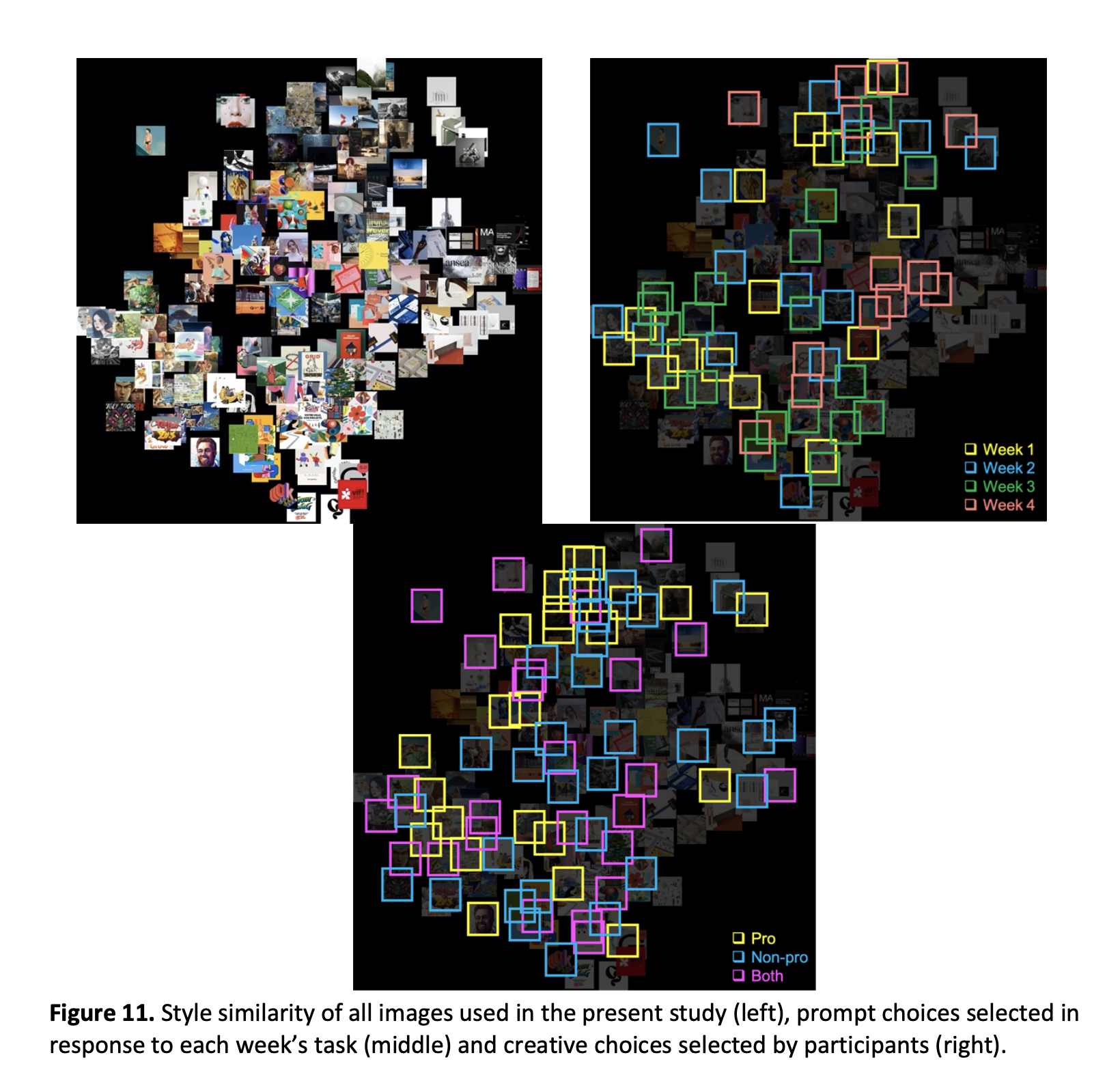 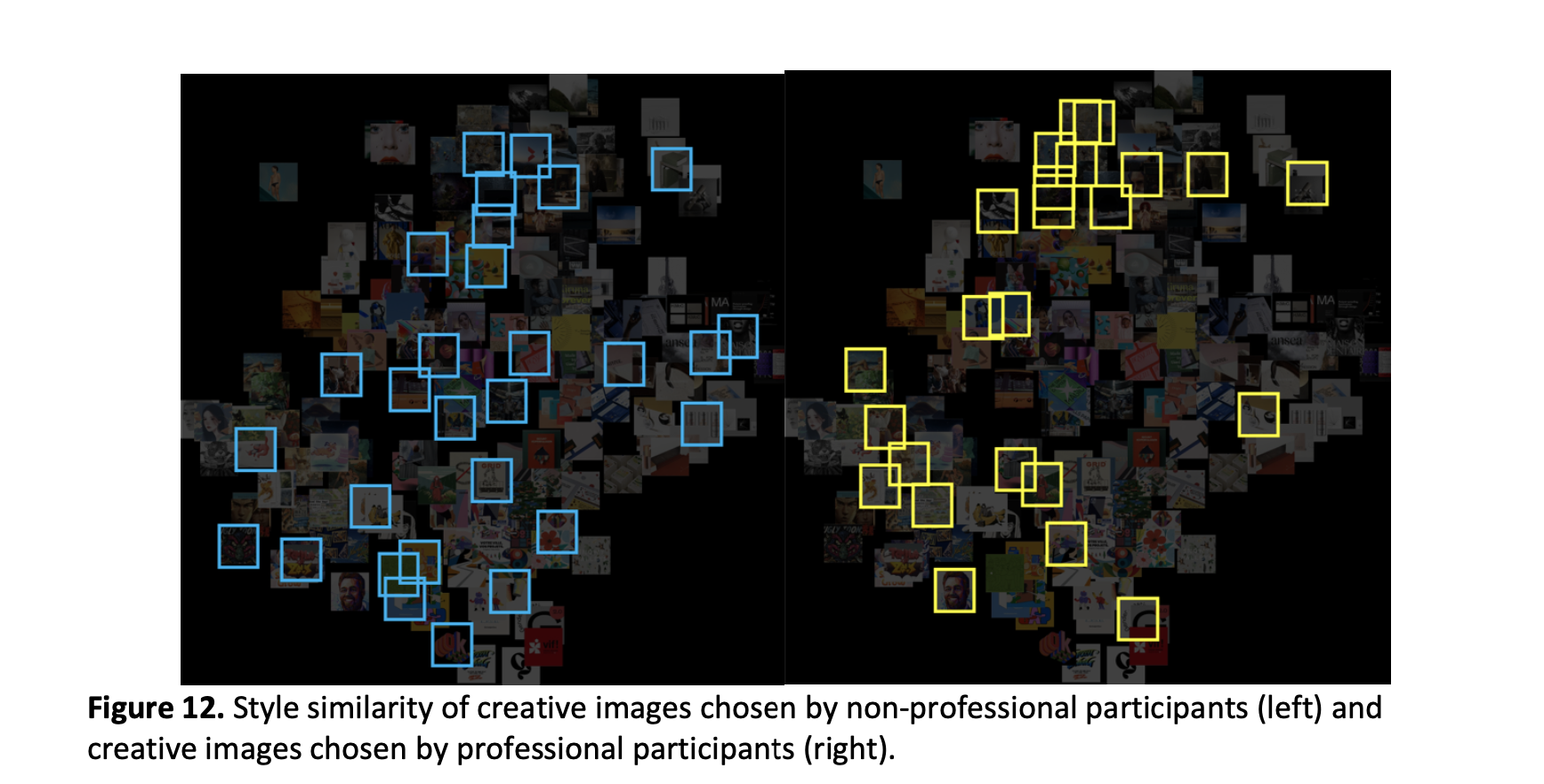 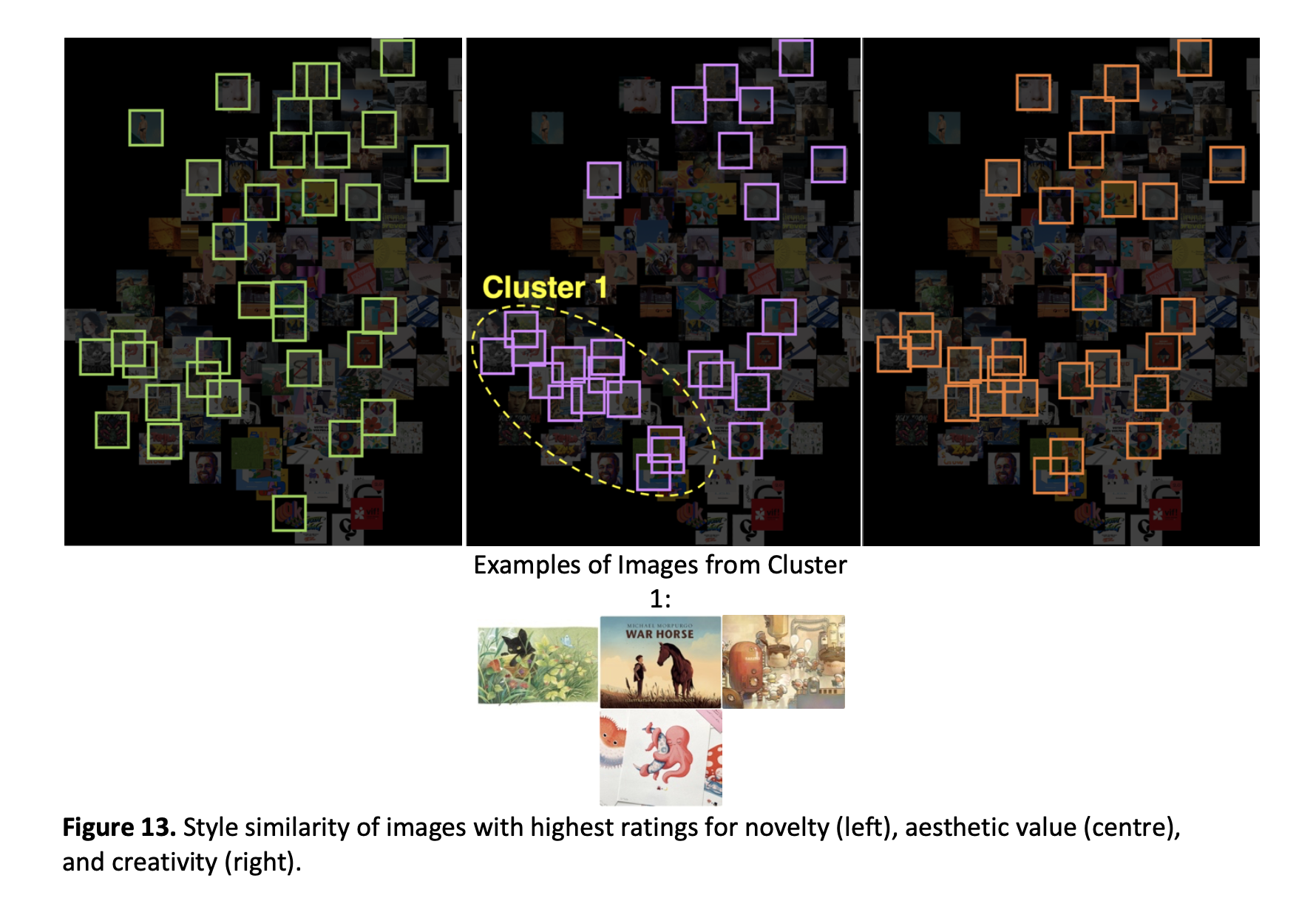 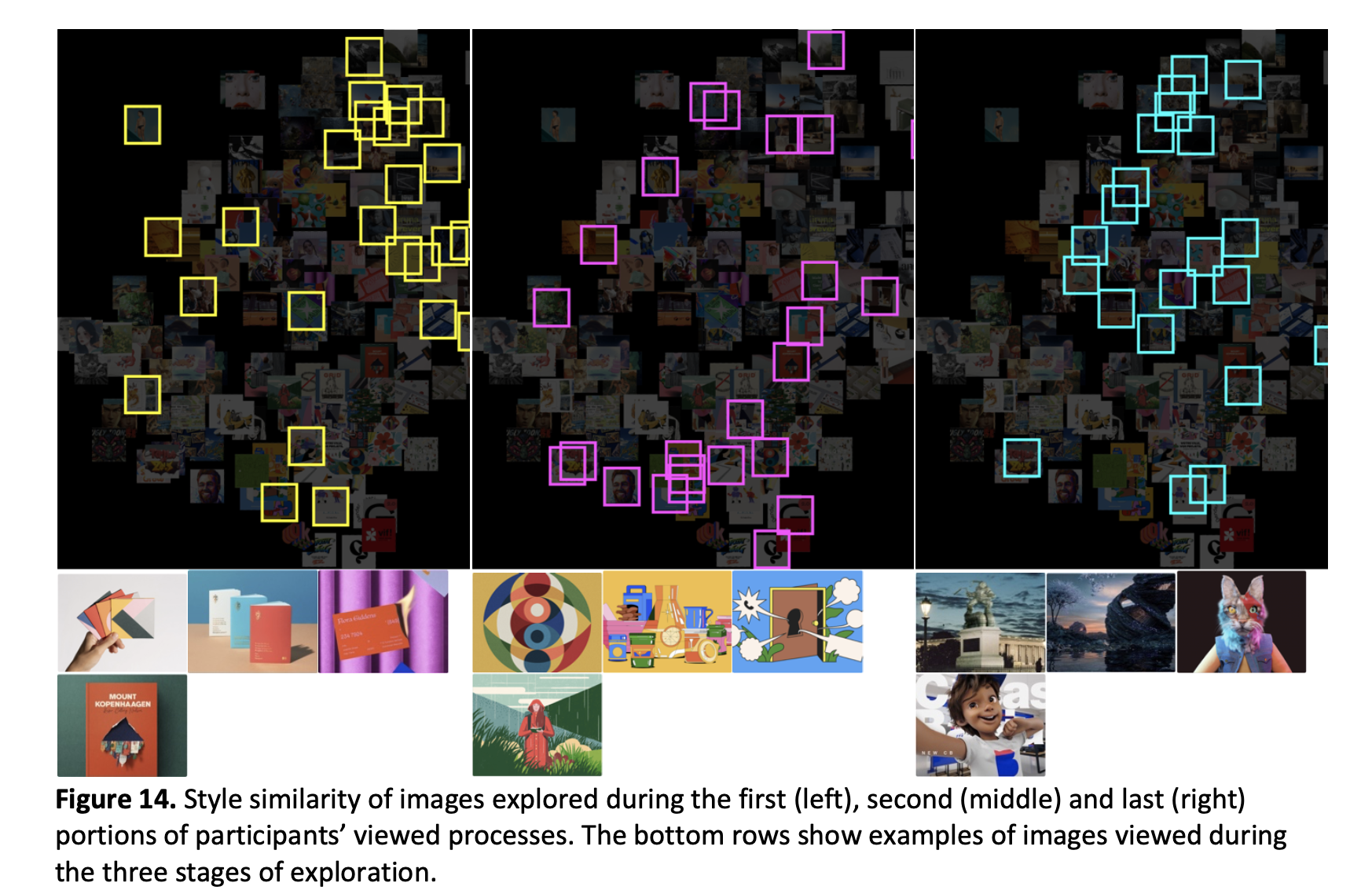 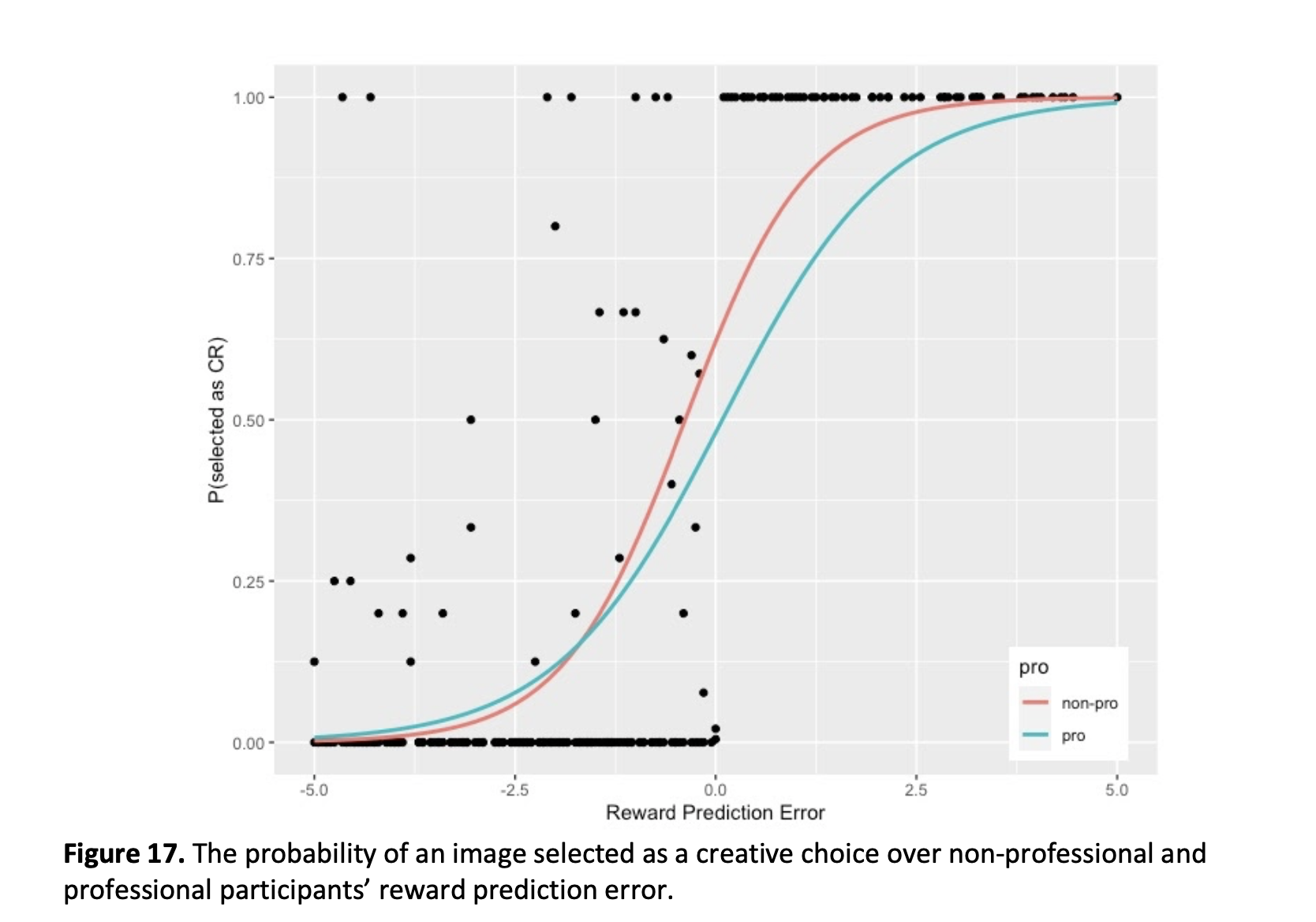