The Art of Seeing: How Does Artistic Visual Experience Modulate Perceptual Reorganization Abilities?

This study employs a tripartite strategy to investigate the effect of artistic engagement on visual perception. Participants engaged in a sequence of perceptual tasks ranging from simple (line drawing recognition) to complex (perceptual reorganization of two-tone images, which are difficult to identify). Additionally, participants (n = 87) belonged to one of three experimental groups: professional artists, professional art historians, and control participants. Artists alone demonstrated significantly enhanced abilities for a complex visual task: perceptual reorganization. They displayed improved accuracy levels for the identification of novel two-tone images that had been conceptually primed. These results suggest that visual abilities lie on a continuum mediated by experience, albeit only for high-level perceptual tasks. Specifically, the authors demonstrate that direct experience creating visual art significantly improves perceptual reorganization abilities.

According to our research findings, it appears that people with hands-on experience physically organizing their perceptual space are better able to reorganize their perception in a top-down approach. It is likely that the process of artistic creation allows artists to create and impose various perceptions. Artists are taught to experiment with elemental properties of the image, such as depth, luminance, and the interaction of form and content. In this way, artists embody experience-based engagement with a visual medium. Their improved abilities may be a product of the act of creating, which is a type of experience in and of itself. By understanding the various visual features that comprise a percept, artists are able to overcome the modification of individual elements.

Previous researchers have described perceptual abilities as a binary switch. In contrast, we emphasized the uniquely scalar nature of our results. Artists’ abilities exceeded those of control participants, which exceeded those of visual novices. This scale is incremented according to engagement with visual media, rather than any other independent variable (e.g. age, gender, intelligence, etc.).  Frequent viewing of visual media is more effective than rare exposure, but hands-on engagement in the creation of visual images is more effective than passive viewing.

Our study provided empirical evidence that artistic training improves visual literacy. At a time when our society is increasingly turning toward a STEM-focused model of education, our findings suggested that the experience of art making should be recognized as a valuable pursuit for improving visual perception at large. While visual perception is often assumed to be a static interpretive force by technologists, our study, like previous research in this domain, provided clear evidence that much of visual perception varies over time according to experience. One’s perception of the world is quite mutable; indeed, the direct experience of artistic creation provides a deep level of visual engagement that subsequently improves one’s perceptual abilities.

presentations
Received George A. Miller Prize for Cognitive Science
Presentation at the Renaissance Society of America Annual Meeting in Toronto, ON in March 2019.
publications 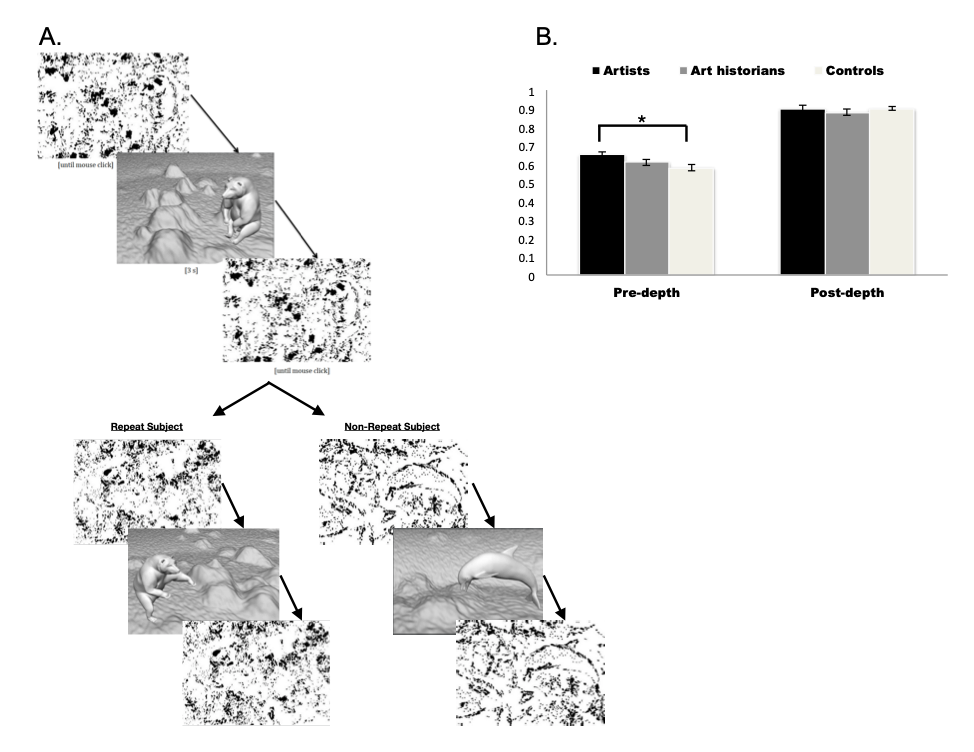