In this research, I studied grapheme–color synesthesia, a neurological condition in which people associate letters and numbers with colors. To this end, I investigated letter-color associative pairings across English-, Spanish-, and German-speaking populations. Then, I utilized complex circular correlational statistics to determine that the hue associated with a letter is strongly correlated with the frequency of that letter in written language. These correlational analyses were repeated across three languages and three distinct groups of synesthetes. Subsequently, I ruled out other possible influences, such as letter order, color term frequency, and cultural biases, via supplementary studies.

These findings were integrated into current developmental accounts of synesthesia: the findings help to explain the cause of individual grapheme-color associations and suggests that synesthetes’ exposure to written language guides the grapheme–color associations that they form. This bolstered previous neurophysiological data, which suggested the existence of excess neural connections between cortical area V4 and the VWFA (visual word form area) in synesthetes, due to the neuroanatomy of these areas, which are organized by color hue and letter frequency respectively. Additionally, this study provided the first large-scale collection of Spanish-speaking synesthetes’ letter-color associations.

|  See publication
under review
abstract
Grapheme-color synesthesia is a form of synesthesia in which an individual’s perception of numbers and letters is psychologically associated with colors. Synesthetes typically associate each letter with a specific color, but the cause of these pairings is unknown. However, one potentially useful clue is that the pairings appear to be consistent within a language, but different across languages. To determine the cause of these particular letter-color pairings, this study compares the frequency of letters in natural language with the wavelength of their associated colors across English, Spanish, and German speaking synesthetes. The frequency of a letter was highly correlated with the wavelength of its associated color (r2 = 6; 0.7). Frequent letters are typically more red and orange, while infrequent letters are typically blue or purple. Additionally, synesthetes show a tendency to associate more saturated colors with the most common letters (r2 = 6; 0.2), whereas the luminance of the colors is less correlated with letter frequency (r2 = 6; 0.003). Neurophysiologically, this pattern may be caused by the wavelength-specific color receptor neurons of visual area V4 being fused with the language processing neurons of the left middle temporal gyrus (LMTG) that perform semantic recognition. Nelson and Eagleman (2009) theorize that this fusion is caused by a genetic mutation on the sixteenth chromosome. This account, when combined with the current data, suggests that this mutation causes V4 and LMTG neurons to fuse, and that a young synesthete's exposure to natural language guides the specific color associations that are formed as a result. 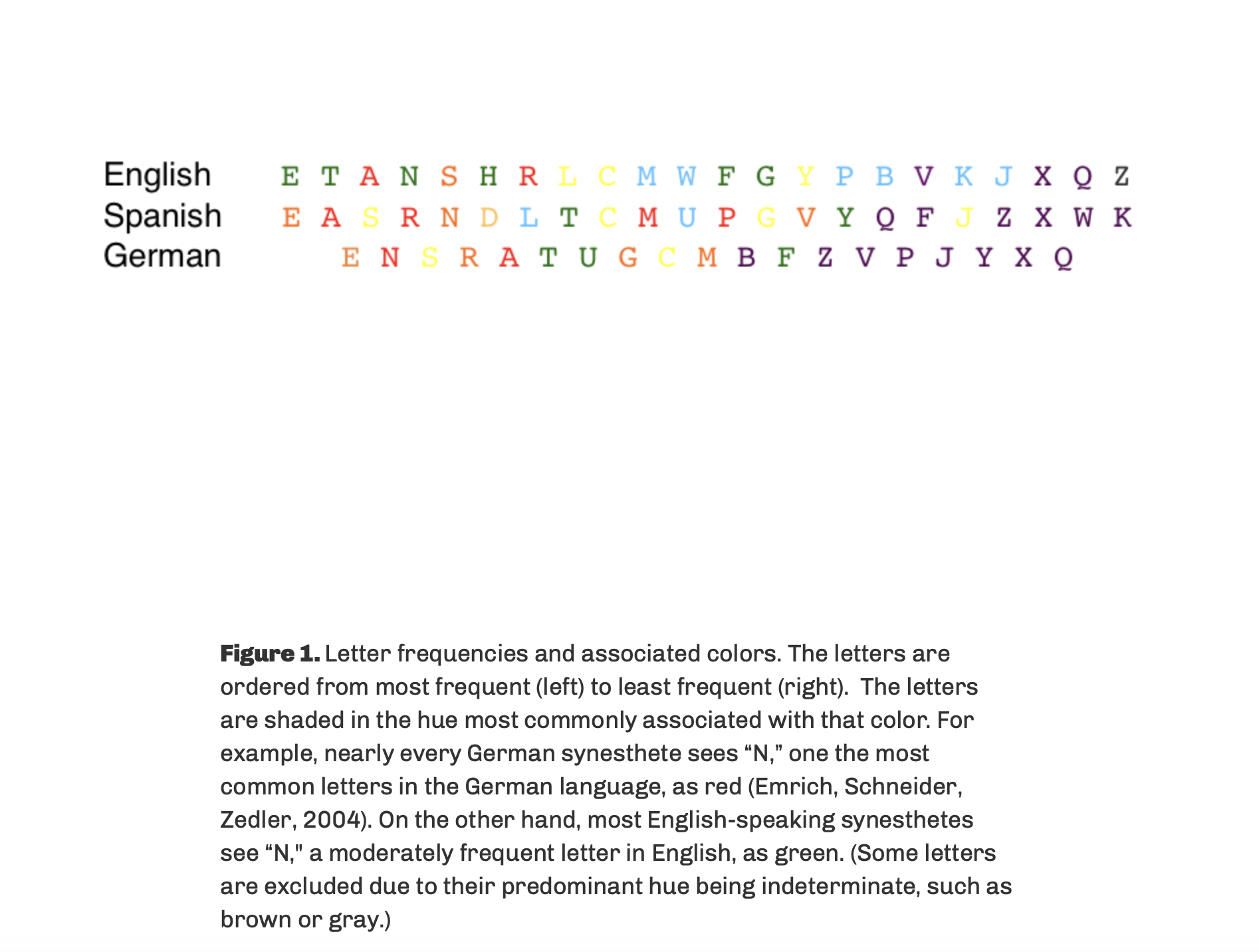