“With the metaperceptual helmets, we have tried to make aperfect loop of looking and being looked at, the project taking as a startingpoint the pioneering experiments in perceptual adaptation carried out bypsychologist George Malcolm Stratton. Wearing the helmets, the visitor becomesa hybrid creature: part human, part machine, part animal, but also part work ofart. A work of art that challenges those who contemplate the helmet– fromthe inside or from the outside– to take a new perspective on the world.” –Anne Cleary & Dennis Connolly, artist collaborators

This helmet was a new version of a technique originally presented in 1988 at the Bristol ECVP that explored what the world looked likein pure colour, without the dark and light contrasts, and the contours, motion, and depth given by luminance (Cavanagh, Adelson, & Heard, 1992). This is not easy to achieve because the same cones that giv eus colour also let us see luminance. To do so, the information coming to the visual system from the L and M (red- and green-sensitive) cones was blocked using a bright yellow light covering the entire visual scene (e.g., Stiles, 1959; Wald, 1966). The L and M cones together provide luminance information, and the bright yellow drives them to saturation, so they no longer respond differentially to spatial variations that would normally activate them. With the L and M cones saturated, the only spatially varying signal came from the S cones (blue-sensitive) that support principally the blue–yellow opponent-colour pathway (e.g., Eisner & MacLeod,1980). The visual information was also passed through a blue filter to limit variations that would stimulate the L and M cones. This version was installed in a theater in Bristol with the observers separated from the stage by a curtain, made of a deep blue filter and a veil lit from the auditorium side with intense yellow light. The audience could see objects through this, but only in shades of equilumininous white and yellow. They could make out objects and people on the stage, but most observers saw the depth as flat, as if the scene were printed on the curtain. Motion slowed, often dramatically. A spinning wheel appeared to slow or even stop completely. Faces were difficult to recognise. Subsequently, this stage version was presented at the ChromaFest at the MIT Media Lab in 1990 and at VSS in Florida in 2004.

In our project, we built a helmet using a miniature, mobile version of this technique. The first prototype was adapted from a welder’s mask. The regular welding filter was replaced with one designed to behave like the equiluminising curtain of the stage versions. At the front, facing the scene, was a deep-blue filter (Lee 071). The filter had to cope with a range of lighting conditions, from artificial light to full sunlight, so we used two layers of deep blue film, the second as a flap that could be pulled down in sunlight. Behind this, we put an 8-mm-thick plexiglas panel, the surface scored with a 1 mm grid of lines (vertical lines on the front, horizontal lines on the back). Along the upper and lower edges of this panel, we installed LED strips (20 cm SMD-8020 LEDs 320-390 lm warm white) with yellow filters (Roscolux, Supergel R10), lighting the plexiglass so that the etched lines in the surface let out the internally reflected light and appear bright yellow, like the veil in the stage experiments.

We placed a dimmer switch on the outside to allow users to vary the intensity of the light so that it just saturated the L and M cones, making motion slow and depth collapse. We added a battery pack with eight 1.5 V batteries in series to provide 12 V to drive the LEDs. To give extra lighting control, we added a switch to activate the top and bottom lights independently. The welder’s mask blocked the light from the front, other than that coming through the viewing screen, and we added a black shroud on the back to prevent light leaking in from behind.

The helmet appears to have captured the main properties reported for the much larger stage versions. It could help to explore the properties of S cone-based vision in natural scenes and may be a useful addition to teaching and research projects at universities concerning color and vision at equiluminance (Gregory, 1977; Cavanagh, Anstis, & MacLeod, 1987). 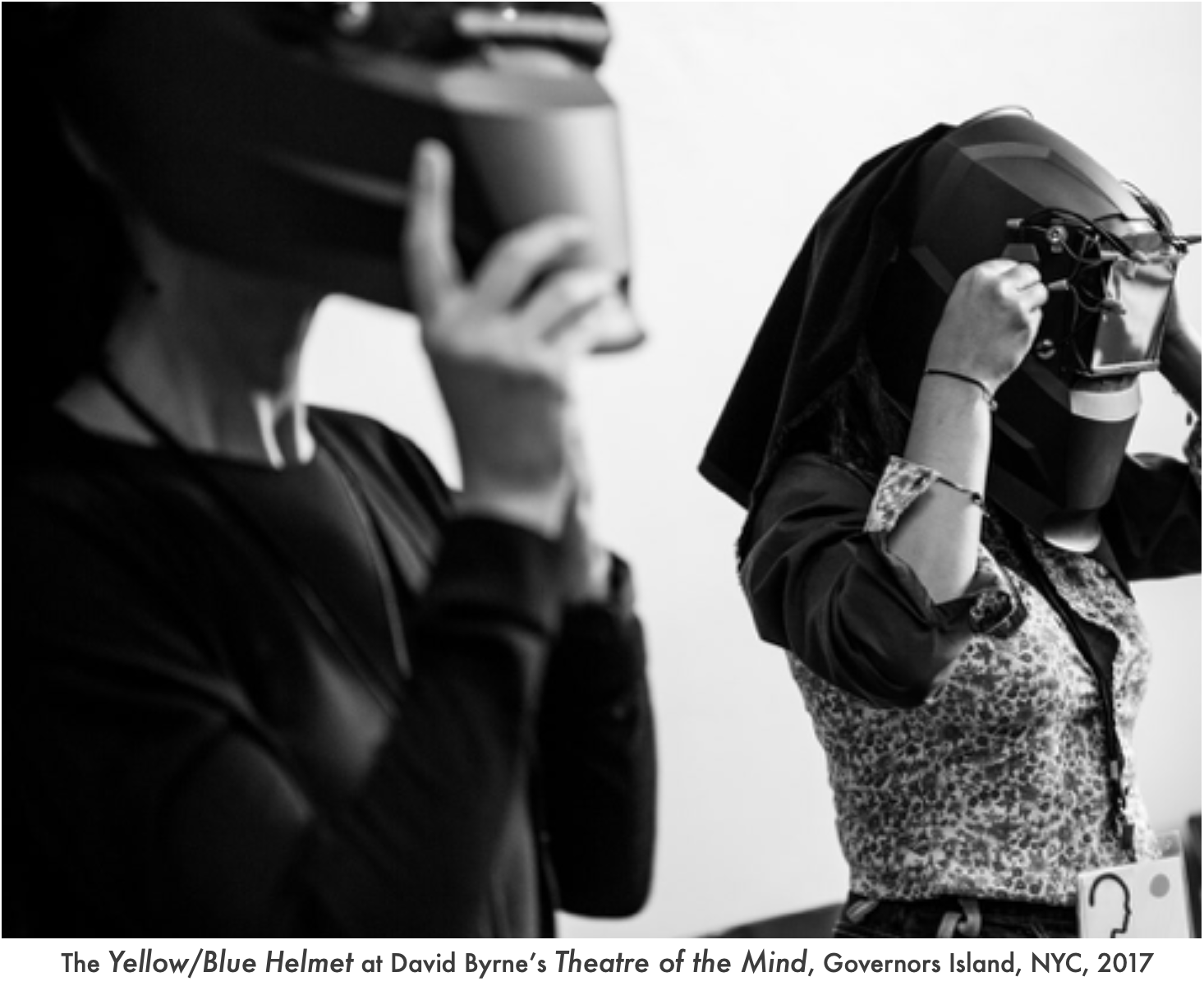 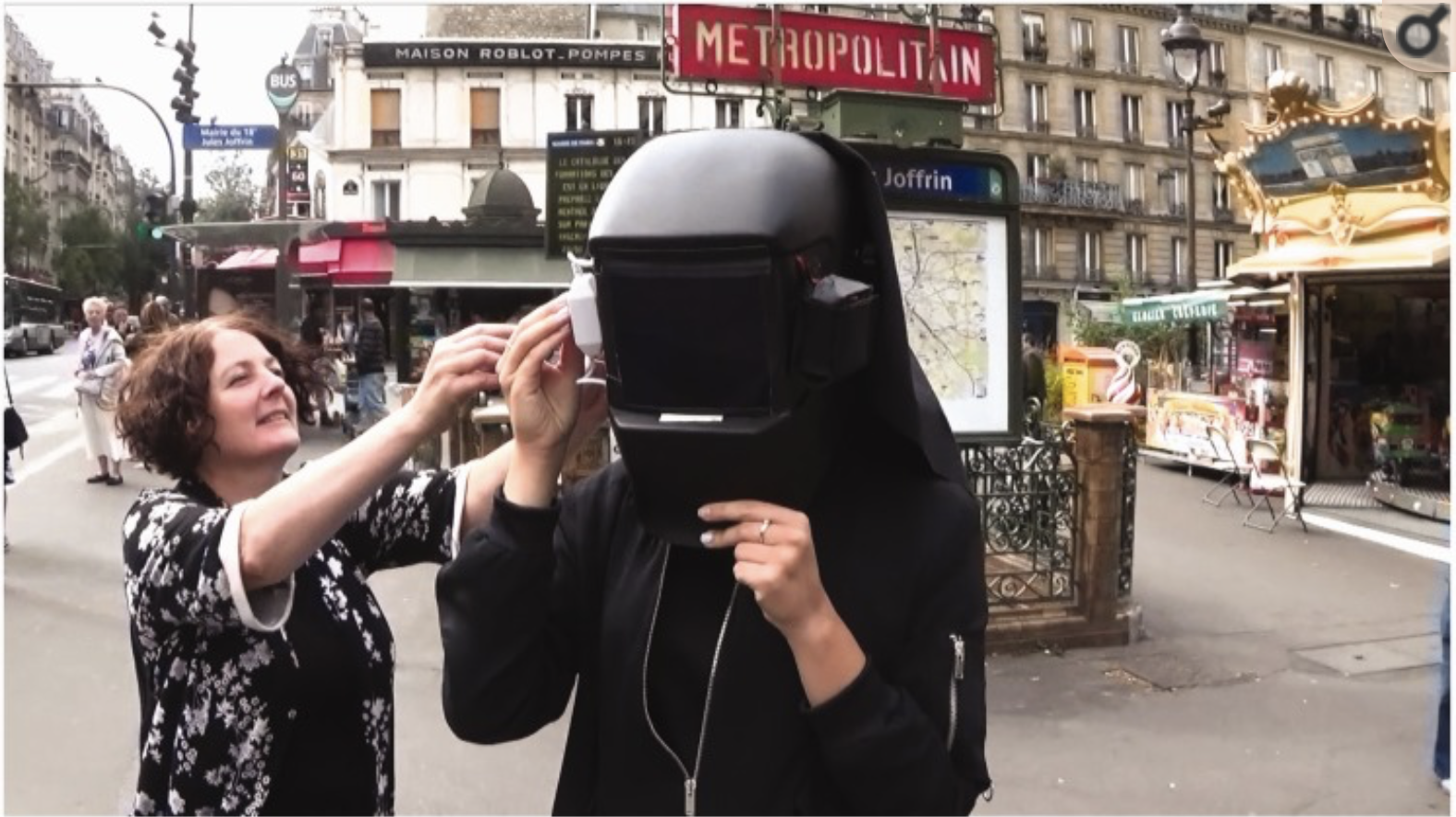 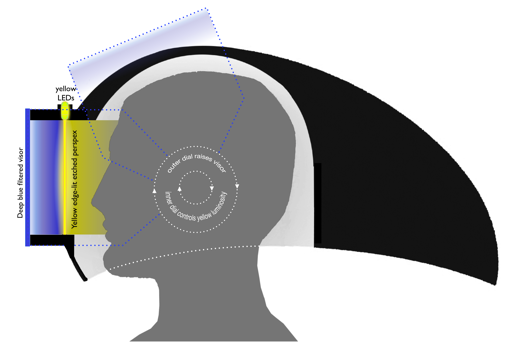 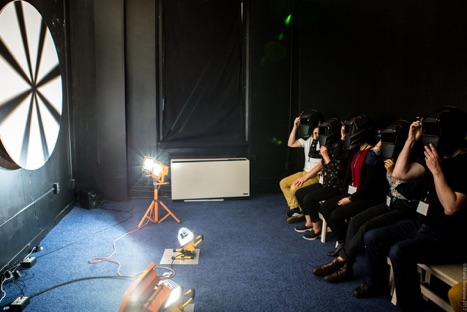