TikTok’s Duet feature purportedly provides a venue for seamless creative collaboration while producing a sense of connected community. However, its usage is conceptualized within considerations of algorithmically-bound attention, valuation, and marketing. Though TikTok may offer a mechanism for artistic performance, it pales in comparison to the richly multisensory experience of offline creative collaboration. This study demonstrates that TikTok users adjust their creations according to feedback from the service’s algorithm in a quest for greater audience engagement. This has direct impact on the perceived quality of their creations: users view their creations as “less creative” the more that they pander to the algorithm. While the easy-to-use online platform seeks to enable the democratization of creativity by empowering users to create short-form videos with the editing functionality and creative control previously restricted to users of complex software, this potential for universal expressivity is constrained through subtle algorithmic feedback.

Through embedded observational research, I examined the production of TikTok Duet videos, which allow users to easily add to videos created by other users. I use Duets as a venue to interrogate methods of virtual creative collaboration in the context of lockdowns that have led people to seek both creative outlets and interpersonal connection. This research program contains three methodological steps:

1.    First, Duet videos were observed and qualitatively analysed in context. A set of 34 videos were selected as a core dataset, representing particularly novel attributes of Duets. It’s worth noting that the selected videos were privy to my own perception of novelty and relevance, and they were selected from a pre-scoped array of videos produced by TikTok’s personalization algorithm.

2.    Next, I conducted semi-structured online interviewswith five TikTok Duet creators. The interviews were recorded and later analysed through a system of qualitative coding.

3.    Finally, I observed the same creators as they made a new TikTok Duet video, examining their process from start to finish. This process was also conducted online, and participants shared their smartphone screen in order to facilitate observation. In addition to screensharing their process, participants were instructed to “thinkaloud”as they progressed through their Duet-making process. The participant-narrated screen capture was used to map out participants’ workflows, highlighting key commonalities.

While they– at first glance– offer rich opportunities for collaborative artistry, Duets are perceived as a second-rate form of creative content. As one participant described, Duets are “mooching,” while “original content” is a creative ideal. Why make Duets, then? All participants were quick to inform me that TikTok prioritizes Duets for sharing in other users’ feeds. They were exasperated and frustrated by what they called “the algorithm”– which they characterized as “unfair” and “impossible.” By prioritizing Duets, the algorithm appears to be actively minimizing creativity, coaxing creators into reupping staid content. Furthermore, Duets force constrictive dependencies; the Duet-er must rely on the content provided by the original creator; logistically, a Duet-er is restricted to the timing, pace, props that the original creator provides. Furthermore, all participants described power imbalances in Duets: on TikTok, those with more followers are perceived to be “above” those with less. Typically, well-known creators are Duet-ed, while lesser-known creators do the Duet-ing.

Before proceeding, it is imperative to acknowledge the inherent goal that every interviewee was striving towards: attention. As one participant flippantly stated, “TikTok is for marketing, not for creativity.” TikTok is seen as a view-generating platform rather than a fulfilling creative outlet. Indeed, most of the participants set metrics for themselves: one participant demands “1-3 pieces of content per day, including a response, a Stitch, and a Duet.” Though I did not plan to ask about “views,” “followers,” or “virality” in my interviews, every participant raised these concepts immediately. In describing their TikTok experience, they measured their progression and growth according to views and follower counts. Indeed, one participant said, “I’ve never heard anyone tell me they only do TikTok for fun.” This platform– often billed as a distracting, multisensory creative relief– has become a commodified business site.

However, the participants were quick to acknowledge that TikTok did fill a “performance void” during the pandemic. Again, this void was filled through metrics of viewership and attention, and performers often compared the size of their online viewership to offline audiences. Though it does scratch a performance itch, most participants found it to be less fulfilling: “online is never going to be the same, but it’s the most I can do for now.” Interestingly, none of the participants in this study had considered speaking to the original creator prior to filming their Duet. In this way, Duets are perceived as remixing rather than co-creating. Furthermore, their relationship is inherently asymmetrical. The originator is given unconstrained creative freedom in production but minimal creative control over future adaptations, while the Duet-er is confined to readymade assets weighted with another’s identity. Duet-ers leverage the unique affordances of the digital space only to re-record endless “takes” of their video, not to edit their output. They purposely avoid complex filmography and digital production to focus instead on the core artform that they seek to display. In so doing, they grasp at the remnants of live performance art. For all its inpenetrable metrics and constraining dependencies, TikTok offers a mechanism to fill the void of performing. In the eyes of these creators, TikTok’s main offering is the provision of an audience– one that becomes accessible when creators deign to “mooch” (i.e., Duet) the content of the creative other.

Through participant observation, contextual analysis, and interviews, it becomes apparent that TikTok creators view Duets as a limited outlet for creativity– one that is characterized less by collaboration and more by market-based optimization. In pandering to TikTok’s algorithm, participants formulate Duets with the hope that the platform will provide a reward: increased viewership. In this way, the despised algorithm becomes a central figure in the creative output: "The algorithm 100% dictates what people create." Rather than neutrally surfacing content, the algorithm plays an active role in shaping such content by deprioritizing what is perceived to be truly “creative.” The creators are also influenced by their algorithmically-curated “niche,” a highly specified version of a traditional audience. Due to the distributed scale of the platform, it suddenly becomes possible– and, perhaps, optimal– to produce content that only suits a narrow subset of the population; at a global scale, that limited group can swell to a loyal community. 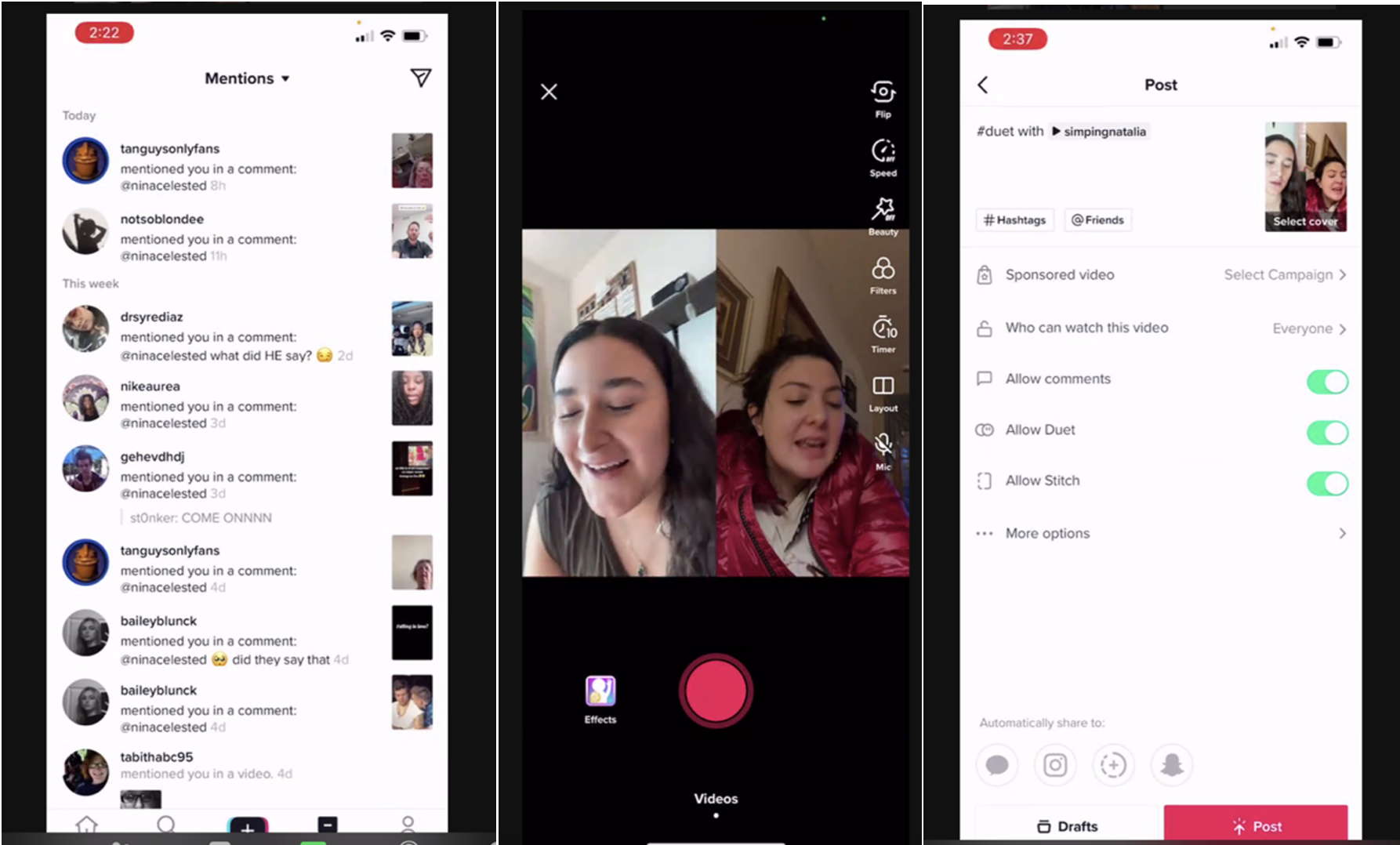